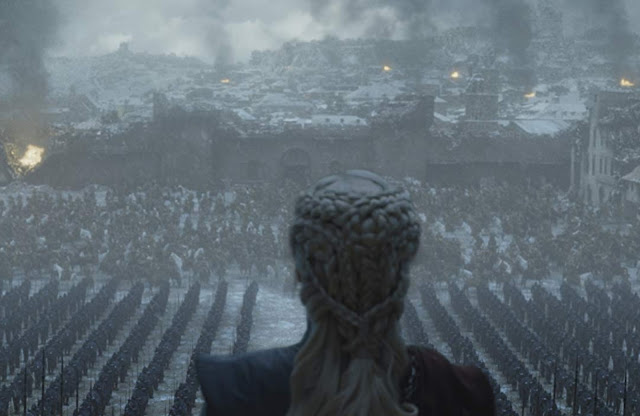 Download Game of Thrones Season 8 Episode 6 - The Iron Throne
After much turmoil and bloodshed across the Seven Kingdoms, the battle for the Iron Throne comes to an end, and the kingdom's true fate is revealed.

Game of Thrones finally closes the story of the struggle for the throne that has lasted for eight seasons in the last episode entitled "The Iron Throne". After the various disappointments felt by the audience in several episodes this season, it seems that it will be difficult for the Game of Thrones series to provide a satisfying cover and erase the audience's disappointment. The episode "The Iron Throne" proved unable to do too much or even save the eighth season which could be considered the worst season of Game of Thrones.


Tyrion Lannister creeps slowly up the main avenue of Kings Landing, Jon Snow and Ser Davos close behind, swords drawn. Fires, destruction, dead children, ashes fall like snow. The City is in ruins. Jon says to stop, Tyrion stares at what's left of the Red Keep and goes on alone. On the street, Grey Worm is executing Lannister Army survivors. Jon tries to stop him, things get tense, Davos suggests they talk to the Queen, they leave but Grey Worm slits a throat anyway.

Tyrion makes it inside, to the map room then finds the stairs to the lower levels. In the rubble he notices Jaime's gilt hand. He uncover the bricks and finds Jaime and Cersei's lifeless bodies. He weeps and pounds a brick in anguish.

Arya gets to an open square and sees Jon Snow pushing through Dothraki cavalry. The Dothraki and Unsullied are in parade formation in front of a large stairway. Jon begins to ascend, Grey Worm waits above. The dragon passes overhead. Queen Daenerys comes to address her Army. In their language she thanks them for their service and says they have only just started, more cities need to be liberated. Jon looks on with concern. She names Grey Worm her Master of War, to cheers and pounding pikes.

From below Arya looks on with hate. Tyrion arrives at the staircase podium. Daenerys tells him quietly he committed treason and he resigns as Hand, tossing his badge down the stairs. The troops realize something is up and quiet down. Daenerys orders guards to take Tyrion away. She then looks at Jon but they don't speak to each other, the Queen departs. Suddenly Arya is beside Jon, she warns Jon that he will always be seen as a threat to the Queen with his Targaryeon lineage.

Jon goes to see Tyrion in a dungeon. Tyrion is resigned to his fate. As they talk Tyrion tries to get Jon to see Daenerys as he sees her now, in light of Kings Landing and leaves him with the thought that Jon can still do the right thing. Jon remembers an old saying from Maester Aemon "love is the death of duty", Tyrion turns it around, pressing Jon and pointing out even Sansa is at risk.

Jon walks through a storm of ashes, the dragon guards the Throne Hall, sniffs Jon and lets him pass. In the Throne Room the walls have been blasted away but the Iron Throne remains. Daenerys approaches in awe, slowly touching the armrest. Jon approaches, Daenerys recalls her childhood stories of the Throne. Jon raises his voice over the deaths and executions, he asks her to forgive. Unrepentant, she asks him to join her new world order. They hug and kiss, Jon slips a dagger into her chest and lowers her to the floor. She dies.

The dragon realizes something is amiss and flies close-by then lands, it sees Jon holding the lifeless Queen. The dragon roars, nuzzles the dead body, then sends a mighty flame onto the Iron Throne, melting the chair. Jon shields himself from the heat but is not touched. The dragon then takes Daenerys' body and flies off.

Several weeks later Tyrion is taken from his cell. Grey Worm marches him in front of the Lords of Westeros seated under an awning at the Dragon Pit. Grey Worm says Jon is still his prisoner. Sansa and Yara Greyjoy argue, Davos tries to conciliate. Tyrion points out the King of Westeros must decide, they must choose one now. Edmure Tully stands and starts his claim, Sansa puts him down. Samwell Tarly tries to raise democracy, after a pause the others laugh it off. Tyrion then makes a strong case and concludes Brandon Stark should be King. Tyrion also says the next King must not be born but chosen by the Lords to serve the realm. Bran accepts readily as if he had already foreseen. All say 'aye'. Sansa declares independence for the North. All hail "Bran the Broken". Bran then says Tyrion must be his Hand. Grey Worm protests.

Tyrion goes to see Jon in a cell, it has been decided to send him to the Night's Watch, an outpost for the unwanted. Jon can have no wife or lands. This will appease the Unsullied. Jon is still not sure he did the right thing, Tyrion says to ask again in 10 years.

Jon walks to the harbor, sees an angry Grey Worm and the Unsullied setting sail for Naath. Jon meets Bran, Sansa and Arya to say farewell. Arya says she will be exploring west, with her Needle. Jon kneels before Bran, then boards his launch to take him to the far North.

Brienne has the manuscript for the Kingsguard History. She updates Jaime's section and closes the book, sadly.

Tyrion enters the Council chambers and sits in the Hand chair at the head of the table. He rearranges the other chairs just before his Council enters. Sam brings in a large tome, "A Song of Ice and Fire", the history of Westeros since King Robert. Sam jokes that Tyrion is not mentioned in the book. King Bran arrives, Ser Podrick pushing the wheelchair. Bran notes a Master of Whisperers, Master of Laws, Master of War are still vacant, Tyrion says suitable names will be provided soon for approval. The dragon was last seen in the East, Bran says maybe he can locate him. Bronn, Lord of Highgarden is Master of Coin. Lord Davos is Master of Ships. The Council argue in good nature the priorities facing the Realm.

Tormund watches from a balcony as a morose Jon Snow arrives at Castle Black.

Sansa is prepped for her coronation ceremony. The Lords of the North all hail Queen Of the North.

Arya sails away on a ship, looking forward to her new adventures.

Jon is greeted by the Wildings and reunites with his dire wolf Ghost. Tormund and Jon then lead the Wildings past the Wall, a tuft of grass pokes out from the snow. They disappear into the forest beyond.


Download Game of Thrones Season 8 Episode #6 by the link below:
Posted Under : Action Adventure Drama GOT