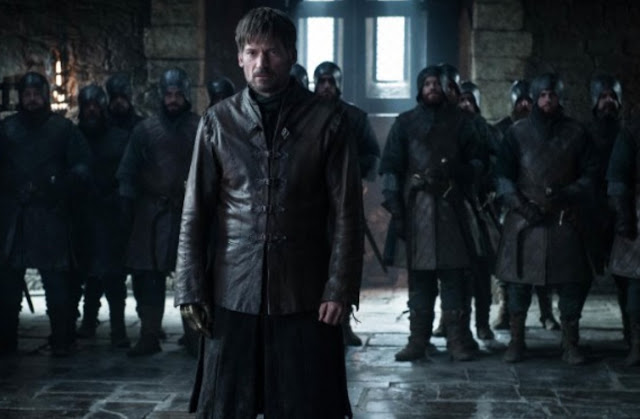 Download Game of Thrones Season 8 Episode 2 - A Knight of the Seven Kingdoms
Jaime confronts Bran and Daenerys at Winterfell to answer for his past mistakes. Meanwhile, the gathered armies continue to prepare for battle against the White Walkers.


The episode "Winterfell" which aired last week is a setup for the climax and the big war that will come this season. The audience was given several sweet reunions as well as the arrival of various key characters who had gathered for the final war at Winterfell. Overall the second episode titled "A Knight of the Seven Kingdoms" still holds the same function as a setup. The difference is that in this episode the characters make the final preparations both physically and mentally. There are some touching moments and important moments that will most likely be the key in the war against Night King in this episode.

Jaime is brought to Daenerys who says she has long waited for the chance to punish the man who killed her father, the Kingslayer. They agree Cersei reneged and instead has 20,000 mercenaries to defeat whoever wins up North. Tyrion attempts to defend Jaime, Sansa also goes against Jaime. Lannister is defiant and says he did it for his House and family during War. Bran pipes up with the "things we do for love" line Jaime used when he pushed Bran off the tower in S1 E1. Brienne stands up for Jaime stressing he indirectly saved Sansa and is a man of honor. Sansa and Jon agree, Daenerys reluctantly agrees to let Jaime live, he thanks her and bows.

Leaving the chamber Daenerys is angry with Tyrion for misreading Cersei and threatens to find another Hand, Jorah Mormont and Varys hear the exchange.

Gendry and other blacksmiths work away. Arya comes to see him again, wants an update on her weapon. Gendry says he has fought the wights, he warns the fight will be bad, Arya wants details, she seems eager to see Death in the face.

Jaime visits Bran by the red tree, he apologizes. Bran is still impassive and says he is no longer Brandon Stark, has no anger and realizes they need Jaime for the fight.

Then Jaime greets Tyrion in the courtyard, they chat about Daenerys and Cersei's pregnancy. Tyrion seems resigned to Fate, Jaime is distracted watching Brienne train Pod and others. Jaime goes to Brienne and offers to fight with her on the Right Flank.

Dany is sad, Jorah comes to see her. He admits he was upset Tyrion was named Hand but accepts the decision. He tells her to forgive Tyrion and makes another suggestion. Daenerys goes to see Sansa for a private convo. Dany is a little upset Sansa switched on Jaime. The two discuss the Lannisters, women as leaders, Dany says she loves and trusts Jon and then they broach their future relationship. What about the North? Davos interrupts them.

Theon Greyjoy has arrived, he reports Yara has gone to the Iron Islands, he has come to fight for Winterfell. Sansa gives him a hug.

Davos feeds the men. Gilly organizes women to go the Crypts. A brave young girl with greyscale on her face catches Dovos' eye, reminding him of Shireen Baratheon. A horn sounds, Tollett, Beric and Tormund arrive. They hug Jon, give the bad news about House Umber, and that Night King will be there before dawn. Tormund looks for Brienne.

Preparations speed up, soldiers are issued dragon-glass weapons. Jon leads an Orders Group around a large map table, saying they are outnumbered. Getting to the Night King is key, Bran says the Night King is after him, Bran is marked on his arm and will be bait. Theon and the Ironborne will guard Bran. Davos will be on the wall to signal lighting the trench. Daenerys wants Tyrion in safety in the crypts, he wants to be in the action. Jon closes by telling everyone to get some rest. Tyrion goes to Bran to hear his story.

Grey Worm sees Melisandre, he offers to take her away together after the battle.

Sam asks Jon if he told Dany yet, he hasn't. Eddison joins them, the three former Night Watch stand together. Sam also doesn't want to go to the crypts, reminding he was the first to kill a White Walker.

Jaime and Tyrion sit by a large fireplace with drinks, chatting about the past. Brienne and Pod join them, Tyrion pours ale. Davos arrives with Tormund, the wilding anxious to see Brienne. He has his own horn of drink. Tormund tells a tale of killing a giant and suckling from the teat of the giant's wife, he drains his horn as Brienne looks aghast.

Arya sits by the Hound on the parapet. She taunts him but he reminds her he fought for her before. Beric joins them, greeting Arya, the Hound threatens to toss him over the wall if Beric starts preaching. Arya leaves the two. She goes to Gendry who has finished her two headed pike she twirls it. He describes briefly what the Red Witch did to him, because he is Robert Baratheon's bastard; she asks about his sex life. She wants to lose her virginity and orders him to strip, they make love.

The fireplace crew stare into the flames. Tyrion reminds them all they are winners, although they acknowledge losing a few battles also. Brienne is sad since as a woman she is not a knight, Jamie draws a sword and tells her to kneel. He solemnly cites the words and makes her Ser Brienne of Tarth. The others applaud, Brienne grins.

Jorah tries to get Lady Lyanna Mormont to go to the crypts, she refuses and wishes her cousin good fortune. Sam gives Jorah the large Tarly valeryian steel sword, Heartsbane. Jorah agrees to wield it to guard the realms of men.

Pod sings a song of lost love at the fireplace. Sansa chats with Theon. Missandei kisses Grey Worm. Jorah leads his men beyond the walls. Jon and Dany are in the crypt by the Liana Stark memorial. Dany says Rhaegar was a good Prince but he raped Liana. Jon explains the truth, his parents were lovers and he is their legitimate son Aegon Targaryen. She is skeptical, now realizing he has a better claim to the throne. A horn sounds.

A distance away, the Night King leads his army within sight of Winterfell.

Download Game of Thrones Season 8 Episode #2 2019 by the link below: