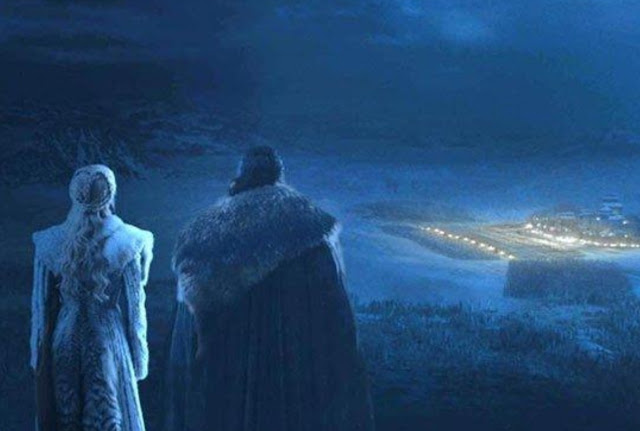 Download Game of Thrones Season 8 Episode 3 - The Long Night
Brienne and Jaime prepare the armies for battle. Arya is desperate to prove her worth as a fighter as the dead draw near.

Night King, the magical figure of a troop that cannot die, finally arrives at Winterfell. A moment that has been set up since the first episode of this series finally reached the peak in the third episode of this eighth season. After the first two episodes with a fairly slow pacing The Long Night managed to answer the audience's expectations and provide one of the most amazing moments ever in the history of the television series. This episode is filled with action and touching moments that cannot be compared to other series.


Sam gets a Dragonglass blade and nervously joins the troops outside. Tyrion watches him go then watches as Theon takes Bran out in his wheelchair. Davos is on the parapet, Sansa also, the dragons fly and scream overhead. The catapults and Dothraki horsemen stand silently. Grey Worm stands at the head of the Unsullied. The Hound and Gendry join Tormund in line. Sam is terrified as he stands beside Eddison. Jorah is on a horse on the wing with Ghost, the dire wolf. Jon and Daenerys survey the scene from a hill to the west, a panoramic view before them.

Davos notices a lone figure approach Jorah on horse, the Red Woman Melisandre. She tells the Dothraki to lift their swords, she touches one and recites a spell in a strange tongue, the swords alight in flames across the entire front. Eddison smiles. Melisandre rides to the Gate, greeting Grey Worm with "Valar Morghulis". Davos orders the Gate open, she rides into Winterfell. Davos rushes down to see her, she tells him not to kill her as she will be dead before dawn. Arya watches the exchange from a distance.

The Dothraki ride into the darkness, screaming their war cries. From above Jon and Dany watch the tiny mass of flames move North. Catapults launch burning fireballs. Suddenly, the Dothraki charge stops, the fires dim, screams and noises, then total darkness. The foot soldiers look about nervously, survivors and a few horses return in panic. Jorah returns. Dany mounts her dragon. A silent wind blows toward the Army, Grey Worm puts on his helmet. The wights attack the Unsullied front lines. Brienne cries out to stand your ground. The hand to hand battle starts.

The dragons flame the wights, Jon and Dany passing back and forth burning the enemy zombies. Arya and Sansa watch in awe. A snowstorm approaches, the dragons have to climb above the clouds. Arya tells Sansa to go to the crypts and gives her a knife.

The battle rages. Theon and the Ironborne wait by the red tree with Bran. Brienne and Jamie fight for their lives. Sam is saved by Eddison who is then killed by a wight.

Sansa arrives in the crypts, the women and children are gathered there with Tyrion.

Jon circles his dragon in the snow, and low to the trees, in the darkness and confusion he almost collides with Dany. The two pair up as wingmen.

The call goes out to pull back, the Army run back inside Winterfell, the Unsullied hold the line to buy time, the Wights press forward.

In the sky Dany and Jon search for the Night King. Bran watches impassively as the dragons fly above him.

Arya and others shoot fire arrows at the Wights who make it past the defenses. The Hound urges others to fall back. Grey Worm orders the trench lit, Davos tries to signal with torches but no one sees. Archers try to light the fire but fail. Men with hand torches are struck down. The Unsullied retreat to the Gate. Melisandre makes her way to the trench, she lays hands on the wood and repeats an incantation. The wights get closer, suddenly fire comes from her hands, the oil-filled trench surrounding the Castle erupts in flames, holding back the Wights. The Hound is stricken by the sight of the raging fire.

In the crypts Varys and Tyrion talk, Tyrion says he might be able to make a difference outside like at Blackwater Bay. Sansa tells him he'd be killed.

The battle quiets down with the trench, Theon and Bran wait. Theon apologizes to Bran, who then goes into a trance and wargs into a raven. The flock of black birds fly and approach the Night King, riding his dragon.

At the trench wights start approaching the fire throwing their bodies on and smothering the flames, others then climb over and break through the fire line. The castle quickly reorganizes defenses. Jon looks on in dismay as the burning trench is breeched. Looking over his shoulder he sees another dragon high above, the Night King commanding his army. In Winterfell they rain burning arrows at the zombies who approach the walls. Jorah and Jaime look down at the climbing Wights, they reach the top of the wall. The men push them back but a huge swarm attacks the castle. Sam kills wights, the men fight desperately but wights jump down to the courtyards. The castle is total mayhem, the Hound is huddled in fear.

Arya swings her pike killing many, Beric calls out to Cleghane. Arya is a killing machine as Davos watches her. A giant wight breaks the Gate and enters the courtyard swinging a huge club, Beric tries to get the Hound to snap out of it, the big man is defeatist. Dondarrion points out Arya fighting for her life. Little Lyanna Mormont charges the giant Wight. It grabs her in one hand raising her up while crushing the young girl. Lyanna manages a last gasp to stab the giant in the eye killing it. The wights pour into the Gate.

In the sky Jon and Dany fly above the storm. The Night King attacks from below, his dragon spewing blue flames. Jon and Dany barely evade and regroup.

In a quiet part of the castle an exhausted Arya hides in a library with rows of bookshelves. She hears clumsy footsteps, and stays silent. More wights enter the dark room, she hides under a table. A drop of blood makes a noisy splash, a wight comes to look but Arya gets away unseen. She throws a book to distract the wights and escapes the library. She makes her way down a passage but is chased by the wights, she runs for her life.

The folks in the crypts hear the struggles above, they wait in silence. Beric and the Hound patrol the hallways, Beric saves Arya by throwing his flaming sword. The Hound and Beric lead her to a refuge. The Hound picks up Arya and carries her away, Betic holds back the wights in a narrow passageway, but dies from his wounds. Melisandre is there in the safe room, she greets Arya, they recall their previous meeting years ago. The wights batter the door. Arya replies with "not today" when asked what to say to the God of Death, she scampers off.

Theon warns his men, wights approach the wood. They fire arrows in defense.

Dany goes after the Night King. She hovers above him and orders "Dracarys" her dragon spewing a huge fireball. The Night King walks out with a half smirk, he walks towards the Castle. Jon draws his sword and chases after him across the battlefield. As he gets closer the Night King turns and raises his arms, animating the newly dead, Jon is surrounded by wights. In the castle the wights stop fighting and there is a short silence. Lyanna Mormont comes alive with blue eyes. The Night King and his White Walker lieutenants approach Winterfell.

Inside the crypts the deceased arise from their tombs. Theon and his men continue to defend Bran. Jon fights for survival, Dany flames his attackers and he resumes his chase of the Night King. Too close to ground, wights climb onto Dany's dragon, weighing if down, it struggles to fly. Dany is knocked off, her dragon is covered with zombies. Wights attack Dany, Jorah appears to defend her. Jon enters Winterfell, everyone is fighting in close quarters, he can't even stop to help Sam who struggles and appears to be overwhelmed. Slashing his way he looks for his foe.

At the tree the Ironborne are down to just Theon, he continues to fight bravely. Jorah defends Dany in the open. In the crypts, Sansa and Tyrion huddle in fear, they appear to consider suicide. Tyrion makes a move.

The Night King's dragon smashes into the castle walls, Jon takes cover. Jaime and Brienne are backed into a corner, Jorah fights on. The blue dragon stumbles around the castle, Jon diving behind walls for safety. The Night King and his White Walkers stride confidently towards Bran, Theon fights alone. A pause, now surrounded, the wights clear a path for their King. Bran tells Theon he is a good man. Theon replies with thanks then charges the Night King. Theon dies, the Night King glowers at Bran. Jon tries to approach the Dragon but has to evade the flames. Jorah is mortally wounded, makes a last stand. The Night King walks alone toward Bran, pausing close up, they stare at each other. Jon decides to face the dragon and stands in front of the beast screaming at it, the beast opens it's mouth.

As the Night King reaches for his sword, Arya comes leaping in behind him, he turns and grabs her around her neck. Arya drops her knife from her raised but blocked left hand, catches it with her right and stabs the Night King. He shatters into ice fragments. All the white walkers and blue dragon shatter also, the wights drop dead. The battle is over. Arya smiles at Bran, Dany weeps over Jorah. Her dragon lands behind her.

The Hound and Melisandre come out of the castle, she walks toward the dawn throwing off her necklace. Davos watches as she turns to dust in the wind, her robe falling to the ground.

Download Game of Thrones Season 8 Episode #3 by the link below: