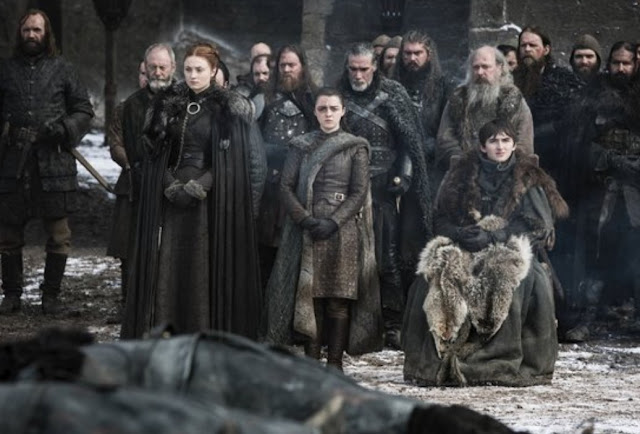 Download Game of Thrones Season 8 Episode 4 - The Last of the Starks
Jon and Daenerys look to the South in the wake of a costly victory, and Tyrion proposes a compromise which could help to ease tensions.

Since its first season in 2011, the figure of Night King, White Walker and his army has been set up as the greatest danger in the world of Game of Thrones. Who would have thought that in just one episode of Night King and his army was defeated? It feels a little anti-climatic when compared to the expectations and hype of the audience for this last war. The audience certainly hopes there is a satisfying payoff for various setups that have been given since the first season. Conversely, many payoffs that have never been setup before. This week Game of Thrones returns to the television screen through its fourth episode "The Last of Stark".


Winterfell has arranged the dead on large funeral pyres outside the castle. Jorah, Lyanna Mormont, Beric, Eddison, lie at the head of groups. Daenerys kisses Jorah Mormont's corpse, Sansa grieves over Theon Greyjoy, and places a Stark hairpin in his tunic. Jon makes a short but moving speech honoring the fallen, their sacrifice will never be forgotten. The pyres are lit.

At a wake afterwards the Living share food and drinks. Daenerys singles out Gendry and publicly confirms he is the Baratheon heir. She makes him Lord of Storms End on the spot. Davos is the first to toast him. Jon hands him a goblet. Tyrion quietly remarks that she now has Gendry's loyalty.

Jaime and Brienne sit together, he urges her to have a drink.

Davos and Tyrion discuss Melisandre and the Lord of Light. Tyrion then goes to see Bran, he hints Bran should be Lord of Winterfell, but Bran doesn't want it. Tormund toasts the Dragon Queen, Daenerys then toasts Arya as the Hero, to resounding cheers. Sansa looks on quietly.

Tyrion plays Truth or Dare with Brienne and Jaime. Tormund pumps up Jon's leadership to great cheers, Dany looks on awkwardly. Varys notices her discomfort as she leaves the Great Hall.

Drunk, Tyrion states Brienne is a virgin, Brienne stands up without answering. Tormund comes by also drunk but she again rebuffs him. Frustrated he laments to Cleghane, then finds another girl who is willing. The Hound turns down another young lady offering her charms. Sansa sits with him to chat. He points out that if she had left Kings Landing when he offered years ago things would have been different. She holds his hand and saying she matured with Littlefinger and Ramsay Bolton.

Gendry finds Arya practicing archery. Eager, he proposes to her, but she kisses him and declines, saying she's not a Lady.

Brienne fires up her bedroom fireplace, Jaime arrives with drinks. He makes an excuse to strip off his shirt, then she takes off hers and they proceed to make love.

Dany comes to her bedroom, Jon is there drunk. He honors Ser Jorah, she couldn't love him in the way he wanted. Jon and Dany kiss, then he pulls back. She knows the others will respect him as King, he says he doesn't want it, so she asks him to keep his parentage a secret. Jon wants to tell the Starks, Dany stresses the secret will get out.

The Council meet at a map board. With the 50% losses in the recent battle they now have roughly equal forces to Cersei. Dany wants to hit Cersei hard, Tyrion and Jon suggest a siege to turn the people of the Capital against Cersei. Sansa suggests waiting to regroup, Dany says she helped the North, now they must reciprocate. Tyrion outlines the strategy; Jon and Davos will lead an army south, Tyrion and Dany will take a smaller group by sea to Dragonstone, with the two Dragons. Jaime will stay in Winterfell. Arya wants a word with Jon.

The Starks meet at the red tree, Jon once again has to convince his sisters of Daenerys' leadership. Arya supports Jon but doesn't trust the Dragon Queen. Jon then asks the two girls to swear an oath of secrecy, they do and he nods to Bran to explain.

At a nearby public house Jaime and Tyrion have a drink and talk about Brienne, the Imp is curious. Suddenly Bronn enters brandishing his crossbow. Bronn is bitter about the Lannisters and punches Tryion in the face. He thinks Dany can win the upcoming war and wants to deal. Tyrion offers Bronn Lordship of Highgarden. Bronn leaves, warning the two brothers.

In the morning the Hound rides off alone, Arya joins him, he curses good naturedly. They both have unfinished business down South. Dany sends her dragons off, Sansa watches them fly away. Tyrion comes to say goodbye, he is puzzled why Sansa hates Daenerys. Sansa is pensive, then asks Tyrion what if there was a better alternative to Daenerys? Tormund says farewell to Jon, he will take the Freefolk to Castle Black. Jon says to take Ghost. Sam and a pregnant Gilly come to say goodbye also, they want to name a boy Jon. Sam hugs his best friend ever. Jon looks at Ghost sadly, then mounts up and rides away.

Grey Worm and Missandei enjoy the sea on the upper decks. Tyrion sits with Varys in a wardroom. They discuss how Jon would be a more popular monarch. They are worried about Daenerys.

The ships drop anchor and Dany takes the two dragons for a flight around Dragonstone. Suddenly large darts hit the other dragon, Dany is shocked to see the animal crash dead to the sea. Looking for the cause they see Enron's fleet approaching through a narrows. Dany goes in to attack but turns away just as Euron lets loose another volley from his ships' ballistrae. Euron then bombards the Northern fleet, Tyrion and others jump in the water for safety. Gasping, they come ashore, but Missandei is missing, Greyworm looks for her in panic.

Later, Euron and Qyburn give Cersei an update on the battle victory. Cersei tells Euron she is pregnant with his child. Cersei says to leave the Gates open to dare Daenerys to kill civilians. Missandei is held prisoner.

Varys and Tyrion urge Daenerys not to attack Kings Landing. Jon is still two weeks away, Tyrion says to demand surrender, Dany agrees as it will show she tried at least. Alone later, Varys says Daenerys is unstable and he must let others know about Jon Snow for the good of the Realm. Tyrion says that would be treason and Jon doesn't even want the Throne. They discuss options, but disagree.

Jaime sees Sansa and Brienne receive a raven-gram. He asks for an update, Sansa explains the sea disaster. Jaime thinks, deep in thought he watches Brienne sleep. She notices him missing then goes out to see him preparing a horse. She asks him to stay with her. He cannot, and recites a few of the evil things he has done for Cersei, he leaves Brienne in tears.

A regiment of Unsullied stand behind Daenerys and her Council near the Gates to Kings Landing. Cersei is high on the walls above, Missandei in chains beside her. Qyburn goes out to parley with Tyrion. Tyrion demands Cersei surrender, Qyburn says likewise to Daenerys or else Missandei dies. Tyrion tries to reason, Qyburn is just a messenger, but points out their strength. Tyrion goes to the wall to appeal to Cersei, she stands down her archers to allow his approach. Tyrion calls up to give it up for the sake of her baby. Cersei doesn't respond but gives her prisoner a chance for last words. "Dracarys" she calls out.

The Mountain decapitates Missandei of Noth, her body falls. Grey Worm and Daenerys watch in horror, the Dragon Queen leaves seething with fury. Tyrion and Cersei exchange a last look.


Download Game of Thrones Season 8 Episode #4 by the link below:
Posted Under : Action Adventure Drama GOT